Colonialism, Culture and Gender in Timor-Leste 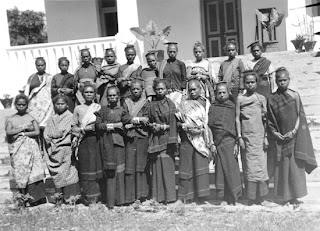 No Timorese cultural values that restricted women to participate in anything (ritual, ceremonial, cultural, social, political, economy). Tricky question is “capacity”.... If one does not have sufficient skills, men or women can not participate “well” to discuss public affairs. That doesn’t mean their interests is excluded. Timorese culture defines masculine and feminine roles with no reference or restriction to gender, except in very special case (in some ritual practice). That means a men or a women can voice out a masculine or feminine voices or concerns. Timorese culture indeed define women in a more domestic, ritualistic, symbolic, silent, fertility, immobile, peace, tranquility ways. But it doesn’t not restricted women to participate in masculine-political arena of political power to exercise masculine power or to exercise feminine-authority if they choose too. This also means that, men can participate (or do) feminine work such as ‘soru tais’, cooking, wash clothes, etc…. It is this very flexibility that has made Timorese culture surviving internal and external pressures.

In traditional realm, pre-European arrivals, there is an oral-reference to an egalitarian society (‘tempu rai diak’ [the tranquil time], our parents call it in Tetun) where men and women equally participated in ritual, social, cultural, political and economic activities freely, in a balance manner. It makes sense, because they (men and women) in their small communities share the same knowledge. A balance on knowledge between men and women. Tranquil time existed in the past, a stable social order established by our uneducated ancestors, where men and women considered equal, even though they still naked people as some early Chinese writer decribed.

When European arrived in 15th century, the worst thing they did was to disrupt the local social orders, by working closely with the ‘gate-keepers’ (the local liurais) and ordered them to act like a king in western feudal or monarchy system. This ‘social order disruption program’ implemented through the ‘gate keepers’ which in its original role was to protect the people, but now they were working to defend the colonial ‘dirty-hidden’ interests. In implementing this ‘social order disruption program’, they often appointed ‘wrong’ people to exercise political power, which proven disastrous to local values and population. Timorese were confused because their social order disrupted and replaced with colonial social order which often strange to their own worldview. The colonial, not only tried to subjugate local ideas and knowledge, but also trained the colonized, the Timorese to dislike themselves, to hate and reject their own culture, to think negatively towards their traditional values, to degrade their own knowledge, to interpret 'barlaki' as an act of selling and buying women in economic sense, to think their belief system in a negative way, so that the colonial can better colonize the local. This phenomenon still happening today in Timor-Leste. 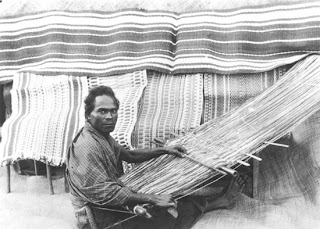 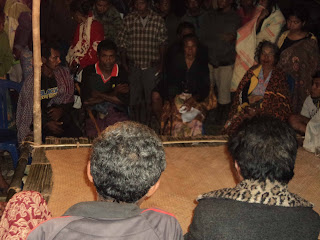 Photo: Two women representing their clan, exercising masculine power, negotiating their interest with other clan. This photo also proved that Women in Timor-Leste can become 'Lia Nain' in traditional activities.

The photo of the Two Women, came about with an interesting story that I want to share with everybody.

The photo was taken on 11th June 2012 (during my uncle’s funeral ceremony), in my house located in Ahabu’u, Suco Babulo, Uatolari, Viqueque. This is a very interesting negotiation for me to observe at that time. The negotiation involved my family as the wife-taker (fetosan, the life taker), in inferior position and the Two Women represent the wife-giver (umane, the life giver) in superior position. It is interesting to observe how the idea of gender, the masculine-power and the feminine-authority dynamics  played out in the negotiation because there were two men (my brother and my uncle) represent the wife-taker (life taker, the masculine values) in an inferior position to two women represent wife-giver (life giver, the feminine values) in superior position in Timorese marriage relationship. It is under this understanding that the negotiation take place. Gender (men or women) became less important here. If we put this situation in 'modern gender equality discussions', it becomes a delicate issue.


Secondly, the two women came from another language group (Makasae of Ossu in this case) and my language group itself is Naueti. Strangely, the whole negotiation was carried out in Makasae because my brother and my uncle are fluent in speaking Makasae while the Two Women can not speak our language. Many people can not follow the discussion, because the Makasae they were using is one level higher than the everyday Makasae, almost like ritual language. When one party agreed to the other party’s opinion or point(s), they said, “ai loloro” (agreed)

Posted by Josh Trindade at 8:32 AM