In this article, I will talk about three simple Timorese expressions namely matak-malirin, tempu rai-diak and halerik.I am interested in exploring these expressions, because Timorese use them to express what they are looking for in life. This article will discuss about the meaning and the use of matak-mailirin in life by the Timorese and its distribution among them.  The article will then explore the idea of tempurai-diak (the tranquil time), a time in the past where people lived in peace and tranquility with no shortage of food. The article will further discuss about halerik, the singing or chanting of the suffering.

Matak-malirin is derived from TetunTerik language, matak = the green and malirin = cool.The term itself can be found in all language groups in Timor-Leste. Generally, people refer to it as bua-malus (betel leaves and areca nuts or betel nut). In Naueti language for example, people refer to matak-malirin as wai-malu (wai= water, the cool one, malu = betel leaves, the green one). In Idate language it is called mama.

Matak-malirin in this article refers to ‘the green and the cool’, which metaphorically represent the idea of peace, prosperity, good health and protection from bad luck and other misfortune or misery in life. In this case, the green (matak) represents the idea of good harvest where food isplentiful. Meanwhile ‘cool’ (malirin) represents the idea of peace in the society. In this context malirin (cool) has connection to the calmness or coolness of water in a pond. When there is malirin means there is no manas (hot) or violence. Timorese used the term malirin to refer to a calm or peaceful situation while they use manas (hot) to refer to a violent situation.

The ultimate goal of Timorese rituals is to receive matak-malirin which distributed at the end of the event in the forms of betel-nut (bua-malus), corn, rice and meat. For example, at the end of corn harvest ritual, each family who participated in the ceremony will receive betel-nut, corn and meat. 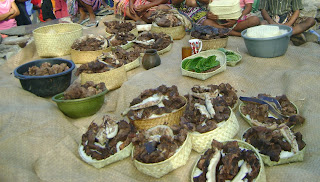 The above picture is taken during an Uma Lulik (sacred house) inauguration from Naueti language group in Uatolari, Viqueque district. There are rice, meat, betel nut and water. This is the matak-malirin in the real form. The meat (beef and pork), rice, green betel leaves represent the idea of prosperity, while the water in the pot symbolizes peace and tranquility in the society. It is the values of peace and prosperity that matak-malirin emphasized.

When people receive matak-malirin, they believe that they will have better harvest in the coming season; better health and they will be protected from bad luck in their life. The distribution of matak-malirin follows the rules set by the lulik where it is given out by ritual power holder to political power holder and it flows from the insider to the outsider.

Matak-malirin receiver is ritually in inferior position to the giver but politically superior (see Trindade 2012). For example, matak-malirin is always distributed by the wife-giver (umane) to the wife-taker (fetosan), not the other way around. It is because the women who married out from the wife-giver house represent the continuation of life to the receiving house. Wife-giver therefore is the source of life. This is the reason why they are ritually superior to the wife-taker and have the right to distribute matak-malirin. 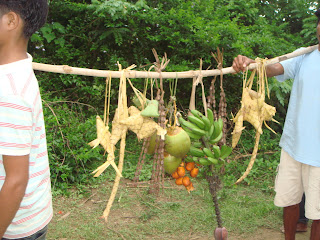 Matak-malirin can only be distributed when the giver and the receiver are in harmonious relationship. This can be seen as a conflict resolution mechanism, because the distribution of matak-malirin required peaceful relationship; therefore existing conflict must be resolved.

Timorese resistance fighters, during the war against the Indonesians, kept matak-malirin in the form of betel nut and used them as ritual protection during the Indonesian occupation. Today, we still know veteran organization called Bua-malus or betel nut.

For those who live modern life in Dili, they have different expectations to those who live in rural areas when they receive matak-malirin during a ritual. They no longer hope to get better harvest in their farm, but they are hoping to have nice job in air conditioner office, or a nice car to drive, nice house, etc.

For the State of Timor-Leste, the idea of matak-malirin for the nation and its people, described in the Program for the fifth Constitutional Government 2012 – 2017 Legislature as follows[2]: 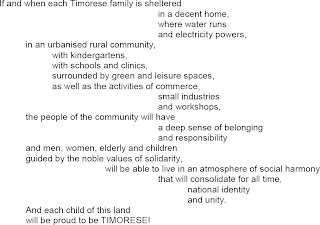 When people are blessed matak-malirin, they believe they are living in tempu rai-diak. Tempu rai-diak refers to a time in distantpast whenpeople lived in peace, agriculture was good and there was no shortage of food. It generally refers to the time of the ancestors prior to the European arrival.

One can imagine that, those who lived during Portuguese colonial period used tempu rai-diak to refer to the pre-European arrival times. The tranquil time when there was peace, no shortage of food, war or violence. The elderly described that, during tranquil time, people freely go to their farms without fear.

Tempu rai-diak also known as tempu beiala (the time of the ancestors), BaboSoares (2003) described that:

“[…] life in the beialaperiod is portrayed as peaceful, calm and governed by the rules of ukun(lit., rule, regulate) and bandu(lit., forbidden) or customary law. Emphasis is placed on the point that in the time of the ancestors’ life was peaceful, calm and bountiful. There was no shortage of food and the people lived a good life. This is the kind of life later interrupted by the invasion of outsiders. In public conversations, people refer back to the period of beiala as the time of rai diak (lit., earth/soil good) or peaceful times without making a reference to the opposite period, raia at (lit., earth/soil bad) or bad times. The colonial period is generally referred to as the time of war, famine and so on”. (p. 89)

It makes sense why beiala period is referred to as tempu rai-diak. Back in Beiala time, the population of Timor was a lot less than what it is today. That means competition for food, land and other natural resources was not as intense as it is today. Peace and tranquility can easily be created and maintained when natural resources are abundant.

Tempu rai-diak, does not mean there is ‘zero violence’ in the society or it refers to a society where violence does not exist, rather it emphasized the certainty in the society where a stable social order existed. As an example, during the Indonesian occupation, they referred to the Portuguese time as tempu rai-diak. Portuguese time does not mean a time of zero violence- there were wars among tribes within Timor-Leste. People were traded in exchange for gun powder (ammunition) during this time of war. But why is it that the Portuguese time is referred to as the time of tranquility? The difference perhaps lies within the consequence of the war itself, where during the Indonesian occupation the catastrophe of the regime was more severe in comparison with during the Portuguese time.

According to the elderly, the tempu rai-diak was disrupted by the presence of the colonialists. Babo Soares(2003) described that:

“the past, uluk, or beial ania tempo (lit., time of the ancestors) is distinguished from the time of struggle. For a much older generation, beiala nia tempo refers to the period before the arrival of the Europeans. Interpretation of the European period varies from one place to another in East Timor since the occupation and settlement began gradually through different periods in different places. The assumption among old generation Timorese is pointed at the ‘presence’ and influence of Europeans in the period where their forbears had lived. It was a time when the traditional social and political structure was intact and untouched by outside influences”. (p. 86)

Tempu rai-diak is an imagination of a time that existed in the past. Recalling the past can also serve as a tool to revive memories and to remind people, not only of the life of the ancestors but also of the facts of social life in the past. Undeniably, perceptions reconstruct society’s consciousness of the past and help it to understand the past’s relevance to the present (Fox 1979 cited in Babos Soares 2004, 87).

Perceptions of the past are used to reconstruct societies’ histories, their social structures, and their relations with the past. While perceptions are the result of thought and reflection, they are also the result of an interpretation of both oral and written history. Both historiography and oral history present a moral validation to contemporary institutions or political interests and can serve as a basis for the creation of new values (Marr and Reid 1979).

One interesting thing I found is that, the generation of today, especially those who born and grew up during 70’s cannot make reference to tempu rai-diak because they were born and raised during the conflict. For them, the tranquil time exists at present in the tempu ukun-an (Independence time).

When the Timorese sense that they are not blessed with matak-malirin or are not living in tempu rai-diak they will do halerik. Halerik is the singing or the chanting of the suffering. It is used to seek external assistance and it represents the voice of the powerless (ema kbi’it laek) to the powerful (ema bo’ot). Normally, halerik is voiced out by women, children or elderly when they have problem. Halerik speaks out the truth and describes the social, economic and political problems. If we watch TVTL news, it is common in Timor-Leste to hear people say “rona netik ami nia halerik” (please listen to our halerik).

This chanting of the suffering or halerik ca expressed as a song, a poetry, crying (during funeral), or dahur.It also sung in the church during the mass. In song for example, we can see the famous Timorese halerik in the “E Foho Ramelau”(E mount Ramelau) song where it said: ‘tansa Timoroan atan ba bebeik, tansa Timoroan terus ba bebeik’ (why are Timorese still enslaved, why do Timorese still suffer). When people sing the song and repeat this expression over and over, it gives them strengths to fight for better future.

There are differences between halerik during Indonesian time and after independence. During Indonesian occupation halerik focused on the fight for freedom or self-determination (ukun rasik an), the end of violence (terus) caused by the Indonesians, and the economic burden (susar) caused by war and displacements.

After independence, the tone of halerik has changed. Today’s halerik revolved around basic needs of the ema kbi’it laek sira (the powerless). Example of today’s halerik can be found in newspaper headlines as follows: